How to Download Netflix Dark TV Series to MP4

If you are interested with parallel space, time travel and puzzle, Dark will suit your taste.

Dark is a German science fiction thriller web television series co-created by Baran bo Odar and Jantje Friese. Dark was the first ever German language Netflix original series; it debuted on Netflix's streaming service on 1 December 2017. The second season was released on 21 June 2019, while the third and final season was released on 27 June 2020.

Set in the fictitious south German town of Winden, Dark concerns the aftermath of a child's disappearance, which exposes the secrets of, and hidden connections among four estranged families as they slowly unravel a sinister time travel conspiracy which spans several generations. Throughout the series, Dark explores the existential implications of time and its effects upon human nature.

When you first saw Dark Season 1, you may feel it is similar to Twin Peaks or Stranger Things. Dark's central mystery unfolds slowly, both tense and terrifying, culminating in a creepy, cinematic triumph of sci-fi noir. If you felt confused with Season 1, Dark's sumptuous second season descends deeper into its meticulously-crafted mythos and cements the series as one of streaming's strongest and strangest science fiction stories. And the Dark's final chapter Season 3 is as thrilling as it is bewildering, bringing viewers full circle without sacrificing any of the show's narrative complexities.

Without any exaggeration, Dark TV Series is deserved to download for watch again and again offline, especially you can change the Season order to watch. Even you can download the TV series offline with Netflix app (make sure that your devices system supports Netflix downloading), you can only watch and play the downloaded on Netflix, not to say that you want to transfer to USB or other video player devices.

Maybe you can try Kigo Netflix Video Downloader to download the whole Dark Seasons, and you can also move or transfer these downloaded TV series to USB, PS4, Google Drive, VLC and so on.

Step 1 Launch the Netflix Downloader and input "dark" on the search bar.

Select the "Dark" TV Series and click "Download" icon to choose the Season / audio track / subtitle to download. It automatically to shows all the three seasons. 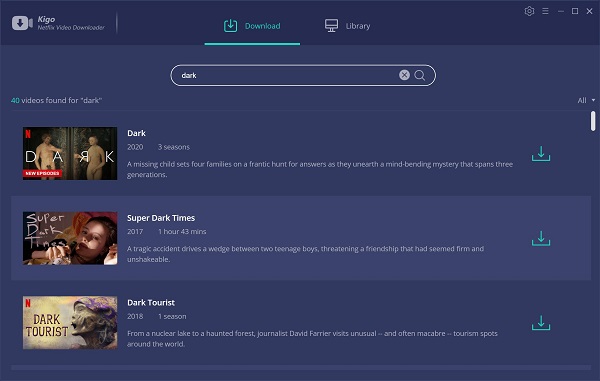 This is a German TV series, if you want to download English, you can choose English in the setting window. And the subtitle as well. 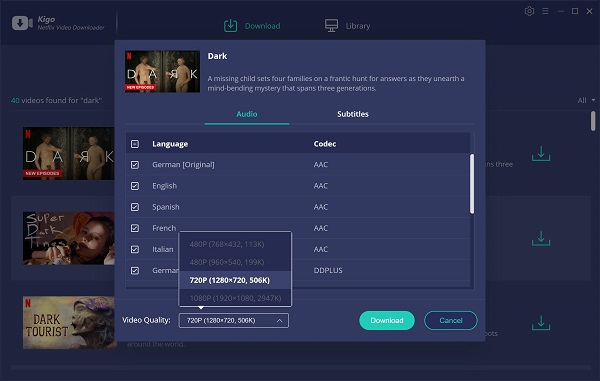 If you don't use Kigo Netflix Downloader ever, you need to login with your Netflix account to go on downloading. 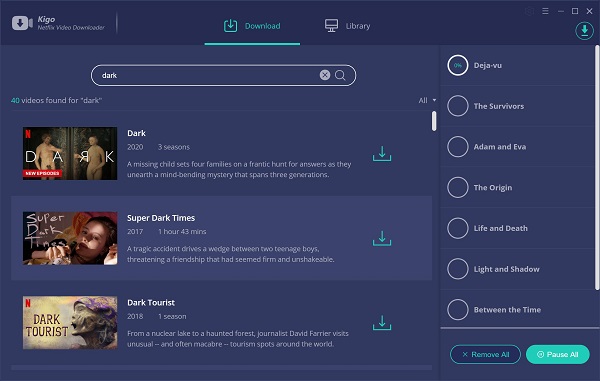 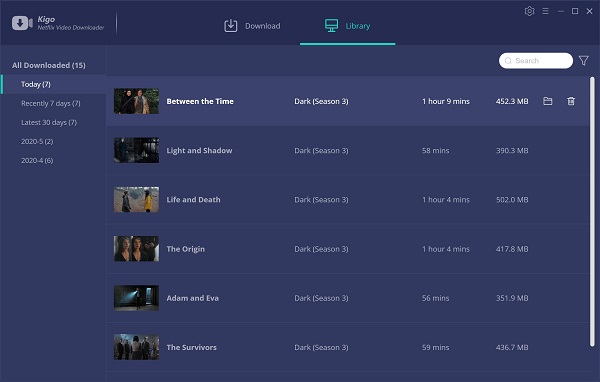