How to Download Squid Game from Netflix to MP4 format

If you asked which one is Netflix's most-watched series to date, there is no doubt that it is Squid Game. Netflix's Squid Game, the dark Korean series about desperate people battling each other to survive a deadly competition of children's games, is officially the most-viewed original the streaming service has ever released -- series or movie. (At least, according to Netflix it is). In a tweet Tuesday, Netflix said Squid Game has been viewed by 111 million accounts, putting the breakout series easily at the top of its own rankings of Netflix's most popular shows and films.

Squid Game was released worldwide on September 17, 2021, to critical acclaim and international attention. Attracting more than 142 million member households during its first four weeks from launch, it is Netflix's most-watched series to date.

As the Netflix original series, you can directly play and watch Squid Game on Netflix. However while you want to play Squid Game on other video player or your MP4 device, is there a method to convert Netflix Squid Game to MP4 format?

How to Download Squid Game to MP4 with Kigo

Kigo Netflix Video Downloader comes to help you to download various Netflix movies or TV shows with up to 1080p quality and save to MP4 or MKV format with audio track and subtitle kept. All the process is simple and fast. What you need to do is just follow the next guide to download Squid Game offline, and you can transfer or sync the downloaded MP4 videos anywhere you like. And the downloaded videos can also be played on Windows Media Player, VLC Media Player and some other video player as you like.

Click to run Kigo Netflix Video Downloader and then click the setting icon to set the output format, output quality and so on. 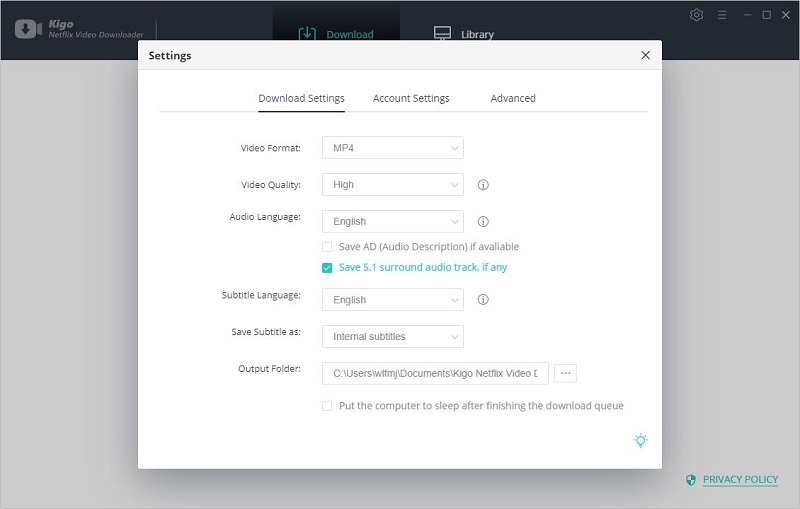 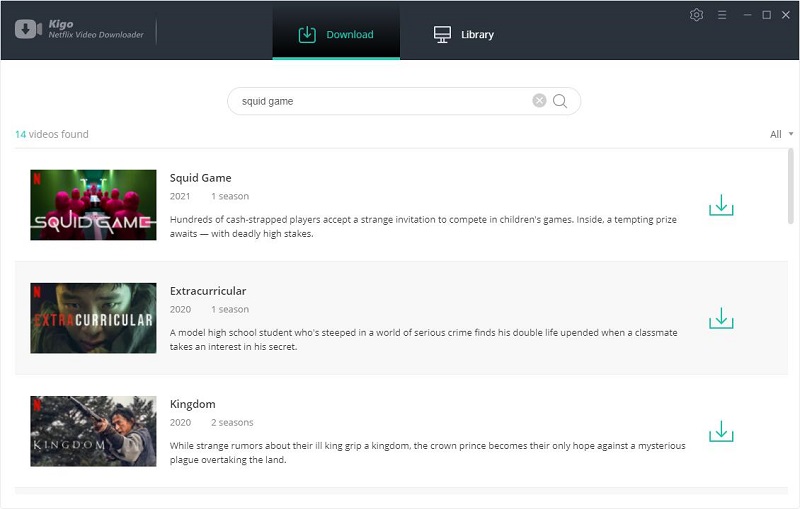 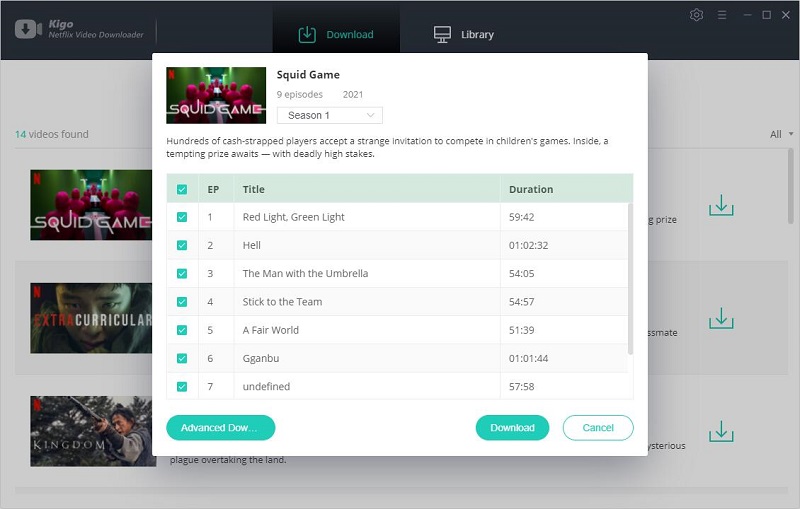 And then you can click the "Advanced Download" in the lower left corner of the window to set the video quality, audio track and subtitles in further details. 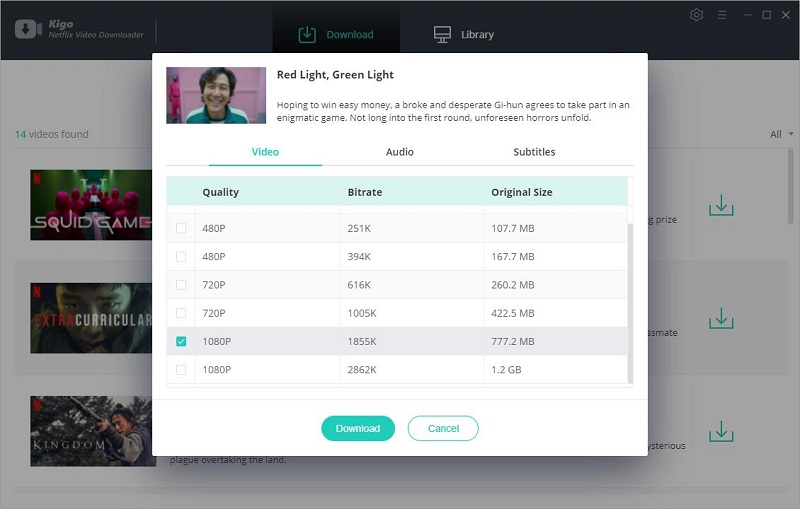 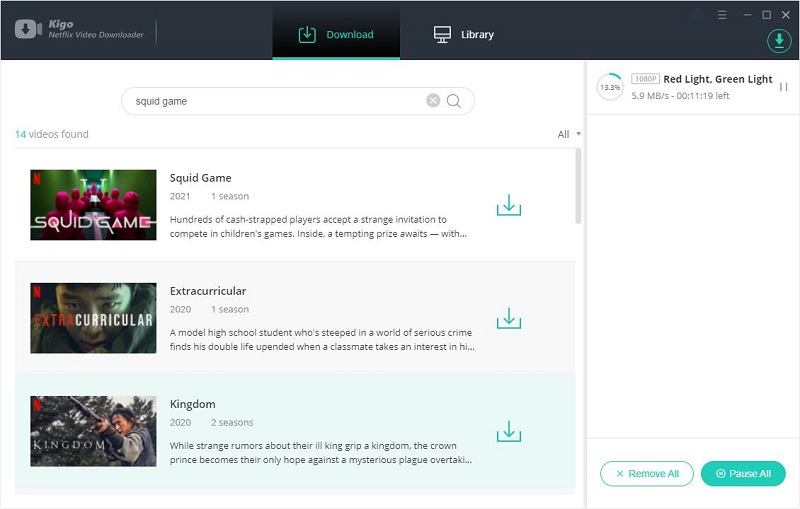 After the downloading, you can click "Library" to find the downloaded TV episode directly. 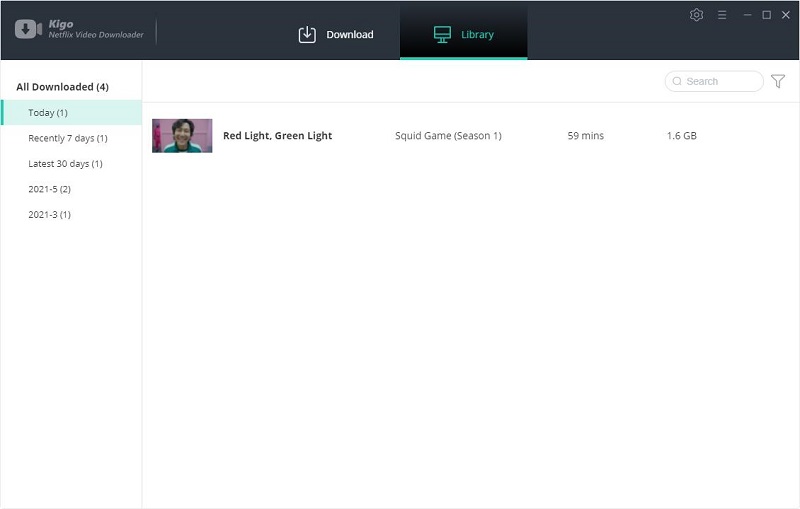 Seong Gi-hun, a divorced and indebted chauffeur, is invited to play a series of children's games for a chance at a large cash prize. Accepting the offer, he is taken to an unknown location where he finds himself among 456 players who are all deeply in debt. The players are made to wear green tracksuits and are kept under watch at all times by masked guards in pink jumpsuits, with the games overseen by the Front Man, who wears a black mask and black uniform. The players soon discover that losing a game results in their death, with each death adding ₩100 million to the potential ₩45.6 billion grand prize. Gi-hun allies with other players, including his childhood friend Cho Sang-woo, to try to survive the physical and psychological twists of the games.

Not only Squid Game, there are also some other popular TV shows on Netflix.

Not only you can follow the above guide to download Squid Game to MP4 videos, you can also use Kigo Netflix Video Downloader to download other Netflix original series, movies, TV Shows and documentaries to MP4 or MKV format with HD quality.

Videos from Netflix™ are copyrighted. Any redistribution of it without the consent of the copyright owners may be a violation of the law in most countries, including the USA. KigoSoft is not affiliated with Netflix™, nor the company that owns the trademark rights to Netflix™. This page is provided for compatibility purposes only, and in no case should be considered an endorsement of KigoSoft products by any associated 3rd party.