How to Download Netflix Stranger Things to MP4 format

The fourth season of the American science fiction horror drama television series Stranger Things, titled Stranger Things 4, was released worldwide exclusively via Netflix's streaming service in two volumes, with the first set released May 27, 2022, and the second to be released five weeks later on July 1, 2022. And users can also follow the guide to download Stranger Things Season 4 in MP4 format with 1080p easily.

If you asked which one is the most classic Netflix original series?

There is no doubt, Stranger Things is one of them. Stranger Things is an American science fiction horror web television series created by the Duffer Brothers and released on Netflix. The siblings also serve as executive producers with Shawn Levy and Dan Cohen.

The whole play revolves around a young girl with psychokinetic abilities and a limited vocabulary - Eleven. Stranger Things is set in the fictional rural town of Hawkins, Indiana, during the early 1980s. The nearby Hawkins National Laboratory ostensibly performs scientific research for the United States Department of Energy, but secretly does experiments into the paranormal and supernatural, including those that involve human test subjects. Inadvertently, they have created a portal to an alternate dimension, "the Upside Down". The influence of the Upside Down starts to affect the unknowing residents of Hawkins in calamitous ways.

The first season begins in November 1983, when Will Byers is abducted by a creature from the Upside Down. His mother, Joyce, and the town's police chief, Jim Hopper, search for Will. At the same time, a young psychokinetic girl called Eleven escapes from the laboratory and assists Will's friends, Mike, Dustin, and Lucas, in their own efforts to find Will.

The second season is set a year later, starting in October 1984. Will has been rescued, but few know of the details of the events. When it is discovered that Will is still being influenced by entities from the Upside Down, his friends and family learn there is a larger threat to their universe from the Upside Down.

The third season is set several months later, in the days leading up to the Fourth of July celebration in 1985. The new Starcourt Mall has become the center of attention for Hawkins' residents, putting most other stores out of business. Hopper becomes increasingly concerned about Eleven and Mike's relationship while still trying to care for Joyce. Unbeknownst to the town, a secret Soviet laboratory under Starcourt seeks to open the gateway to the Upside Down, allowing the entities from the Upside Down to possess people in Hawkins and creating a new horror to deal with.

Stranger Things Season 4 is the biggest season of Stranger Things ever. The fourth season has nine episodes and has continued to be produced by the show's creators the Duffer Brothers, along with Shawn Levy, Dan Cohen, and Iain Paterson.

If you have subscribed Netflix, you can watch videos freely on Netflix as you like.

Just search the original series "Stranger Things", and you can play them as you like.

Netflix supports users downloading videos for offline playing. However the Netflix download limit lets users can only enjoy and play the downloaded videos still on Netflix, not to say download them to MP4 format.

Here we use Kigo Netflix Video Downloader to download Netflix movies, TV shows, the original series and documentaries and save to MP4 format with the audio track including 5.1 surround audio kept. All the subtitle will also be kept.

After you launch Kigo on your computer, click the setting icon to set the output format (MP4 or MKV), output quality (Low, Medium and High), audio track language, subtitle lauguage and so on.

Close the setting windows, input "Stranger Things" on the search area and click to search it. 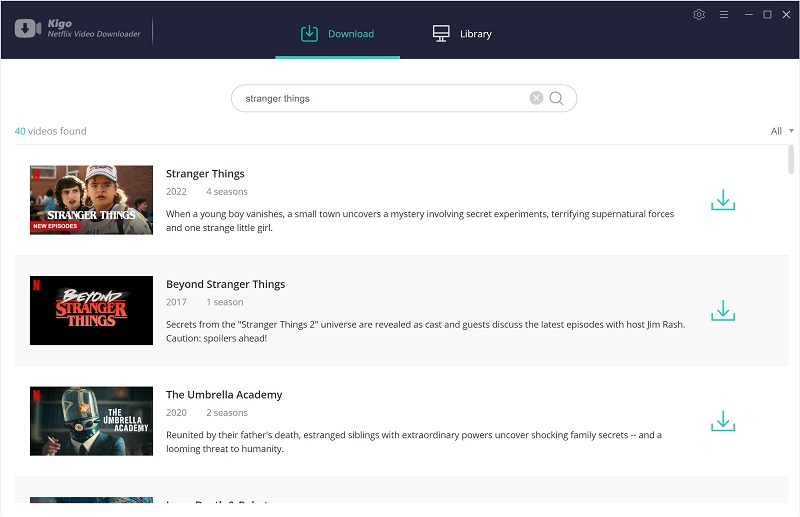 If you don't use Kigo Netflix Downloader ever, you need to login with your Netflix account to go on downloading.

Once the TV show is listed on Kigo, tap the "Download" button to select the season and episodes to download. You can also download the whole seasons one time. 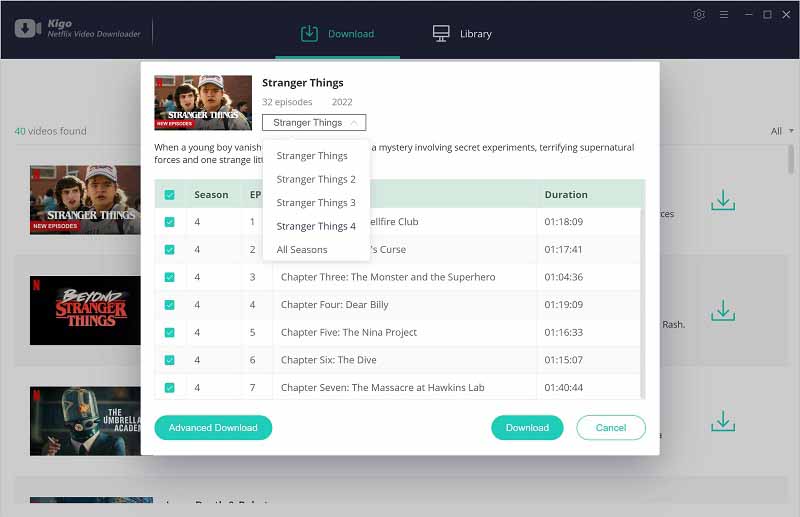 Then click "Advanced Download" at the bottom right to set it with more specific settings. Here you can set the video quality with different bitrates, audio track with different audio quality, and subtitles with three modes for you to choose. 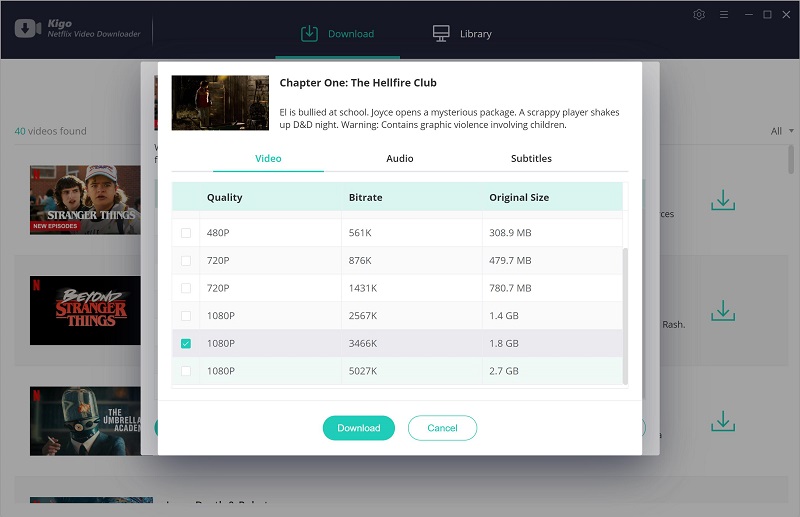 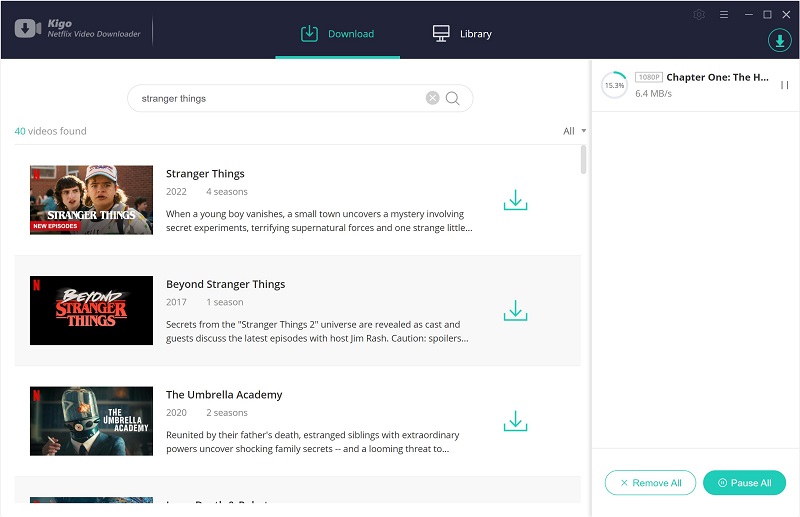 Since Netflix has released Stranger Things Season 4, you can also follow the guide above to download Stranger Things TV show to MP4 format, and also transfer and move them to other MP4 video player as you like.