Now it is starting November of 2020, and there are also some new video contents released on Netflix. "What are worth watching", If you want to find the answer, just go ahead. 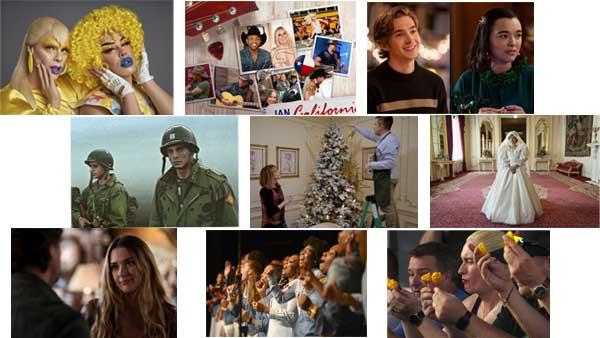 All six seasons of the 1998 - 2003 series that launched the careers of all four of its stars lands on Netflix on November 1 (It's also on Hulu). Millennials can relive their teenage years by rewatching the romances, breakups and other the teen/YA mishegas endured by Dawson, Joey, Jen and Pacey in their small coastal Massachusetts town.

Coffey Anderson is a country star, and his wife Criscilla is a hip-hop dancer. Country Ever After is a feel-good reality series that chronicles their marriage and lives, including what Netflix describes as "tests of faith." We want to see them combine country and hip-hop in one song. That would test anybody's faith.

We couldn't find any pictures of Dash (Abrams) and Lily (Francis) together, then we read the description of this holiday-themed series, and we understood. The cynical Dash and optimistic Lily somehow find each other via notes scribbled in a notebook that they pass to each other around different romantic New York locations (pre-pandemic, natch). Will they end up together in person? Probably, but who knows?

Created by Jeb Stuart and based on a book by Alex Kershaw, this animated drama is about a diverse Army unit from Oklahoma, led by Captain Felix Sparks (James) that lands in Italy in July, 1943 and sets off on a grueling 500-day march across Europe to liberate various countries from Nazi rule. The epic scenes are animated using a method called "Trioscope Enhanced Hybrid Animation", which promises to be more detailed than traditional rotoscoping. Should be a visually riveting series, at the very least.

As we enter the late 1970s, England's Queen Elizabeth (Colman) not only has to deal with the divisive policies of new Prime Minister Margaret Thatcher (Anderson), but the chatter about her unmarried, 30-something son, Prince Charles (O'Connor). Of course, you know where this part of the story is going: In walks young teacher's assistant Diana Spencer (Corrin), whose life is turned upside down when she and Charles get married. And everyone lived happily ever after, right? No?

Rainn Wilson is the executive producer and narrator of this docuseries that examines weird competitions and the passionate players and fans that are drawn to them. There will be episodes about cheese rolling, chili eating, dog dancing, frog jumping, fantasy hairstyling, and yo-yo trick competitions. All of them should be funny and weird. Well, at least they'll be weird.

Benjamin Bradley is an interior design expert with a particular love of Christmas and the holiday season - they don't call him "Mr. Christmas" for nothing. In this reality series, Bradley goes to homes that need to zuuzh up their holiday decorations and make winter wonderlands for people of all faiths. As long as he doesn't start doing laser light shows, we're all on board for this.

Seeking to create one of the most inspiring and powerful gospel choirs ever assembled, Bishop Ezekiel Williams sets out in the Hampton Roads, VA area to find the best and most diverse set of singers possible. He has some expert help - his millions-selling music superstar nephew Pharrell. Both Williamses will audition singers and pick the best amongst them to create this new choir. Prepare to be overjoyed and entertained!

At the end of Season 1 of Netflix's surprise hit, Melinda Monroe (Breckenridge) looked like she might leave Virgin River and go back to the big city. But, since there's a Season 2, that doesn't happen; she's back working for Doc (Matheson) and making moon eyes with Jack (Henderson). As she and Jack deal with the pregnancy of Charmaine (Hammersley), Melinda has to figure out if Virgin River is going to be her home for good or not.

Once these TV series are released on Netflix, users can play and download them as MP4 format for playing offline on other video player devices with the help of Kigo Netflix Downloader.

After the TV series has been released on Netflix, don't worry, you can use the above method to download these new released TV series freely.